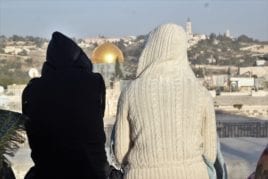 Since President Donald Trump’s declaration in November, the world has focused its Middle East attention on Jerusalem. Though President Trump’s speech was for once carefully crafted and focused, it could not begin to encompass the myriad of emotions, beliefs, narratives and relationships which connect people globally to the center of political conflict between Israel and the Palestinians and a holy site for three of the world’s major religions.

A recent Palestinian Jordanian graduate of the Arava Institute told us of his personal journey from Jordan to the Arava Institute from which a Jewish Israeli student took him to Al Quds, the Arabic name for Jerusalem meaning the “Holy One”, so he could pray in the Al-Aqsa Mosque on Haram esh-Sharif (the Temple Mount). When the Palestinian student asked the Israeli student why he had done it, the Israeli replied that if “I have the right to pray here, you should have the right to pray here too”. As part of the Institute’s Peace-building Leadership Seminar, the academic program takes our students on a study trip to Jerusalem once each semester. After months of discussing the conflict in the warm bubble of the Institute, we take the students to the heart of the conflict to meet with politicians, refugees, settlers, and educators. The Jerusalem trip usually includes a visit to Yad Vashem, Israel’s memorial to the Holocaust, a dual narrative tour of East and West Jerusalem, an opportunity to visit the holy sites and a visit to Lifta, a Palestinian village abandoned when its residents were driven out and fled during the 1948 war to become refugees. A few years ago, we took our students to Ammunition Hill, a memorial to the 1967 War where Jordanian and Israeli troops fought a fierce battle, resulting in tremendous loss of life on both sides. While Israel ultimately won the battle for Ammunition Hill, the triumphant Israelis soldiers gained much respect for the combat skills of their Jordanian adversaries. The students heard from one of the Israeli veterans of the battle and how years later, after the peace treaty was signed between Israel and Jordan, meetings took place between former enemies which spawned new friendships. A number of Jordanian students whose relatives (fathers, uncles etc.) had fought in the Six Day War talked about their own families’ histories and connections to Jerusalem.

My own personal relationship with Jerusalem began when I was 17 and visited the city for the first time in my life. In 1973, before the war, a friend and I volunteered on a kibbutz for the summer. On our first free weekend, we went to Jerusalem to explore the Old City and see the holy sites. We had not thought about booking a room in advance and so at the end of the day we found that there was no accommodation in the youth hostel where we had intended to stay. We ended up sleeping across the street in Independence Park, under the stars. We were not the only ones stretched out in sleeping bags on the grass. Twelve months later, I came back to Israel and spent 6 months in Jerusalem as part of the Jewish Agency’s Youth Leaders from Abroad Year Program. Those six months in Jerusalem in the mid-70s are branded into my memory. Eating falafel on King George and Yafo, exploring Jerusalem neighborhoods like Talpiyot, Kiryat Yovel and Nahlaot, moving about with both excitement and trepidation through Arab neighborhoods like, Wadi al-Joz and Silwan, mastering the alleys and bazaars of the Old City, stealing a kiss from my first love on a rainy day on the campus of Hebrew University or waiting for the number 8 bus on a cold damp Jerusalem night to get back to Kiryat Moriah after eating dinner at our favorite Italian restaurant.

I deeply believe that Israel is the homeland of the Jewish people and that Jerusalem is its capital. I am deeply aware that the Palestinian people believe that Al Quds, Jerusalem, is the capital of the future State of Palestine. Unilateral declarations do nothing to resolve this dilemma, only dialogue and quiet negotiations will enable both peoples to realize their national aspirations and receive support and recognition from the world.