The 220 participants in the 2018 Israel Ride rode into Eilat on October 29th. Despite weather and police challenges, this year’s ride was a great success. As the Arava Institute staff recovered from the largest ride in our history, we looked ahead to a month packed with conferences. In Israel it seems that November is the month to run conferences and workshops.

Early in the month, Arava Institute founder, and faculty at Tel Aviv University, Professor Alon Tal, launched the 1st International Conference on Innovations in Conflict Resolution and Mediation to mark the 20th anniversary of the Good Friday Agreements in Northern Ireland. Due to our years of experience in environmental conflict resolution, Alon reached out to the Institute to be a co-host of the event. On November 7th and 8th, staff, faculty, alumni and students participated in the conference held at the Porter School of Environmental Studies at Tel Aviv University. The Institute had a high profile at the conference as staff and faculty, both facilitated and participated in panel discussions on a range of topics, from the roles of NGOs in conflict resolution, to water as a tool for peace making. Speakers from Ireland, England, and North Ireland spoke candidly and movingly about the ongoing challenges and successes of the 20 plus years of process there. 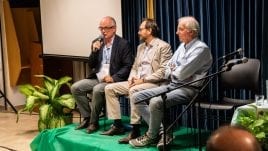 On November 12th-14th, the Arava Institute held its 3rd Annual Track II Environmental Forum Conference. Despite the recent outbreak of violence between Israel and Hamas coinciding with the beginning of the conference, the Institute hosted 96 Israelis, Palestinians, Jordanians, and international donors. 25 Palestinians from Gaza were invited but could not come due to the conflict. The Institute was honored to host two distinguished guest speakers, Head of the European Union Mission to Israel, Ambassador Emanuele Giaufret, and former United States Special Envoy to the Middle East, Ambassador Dennis Ross. The two Ambassadors spoke on a panel facilitated by the chair of the Institute’s Public Council, former Israeli Ambassador to France, Daniel Shek, about the political situation in the Middle East, current US and EU diplomatic efforts, the crisis in Gaza, and hopes for conflict resolution.

Over 20 Arava Institute alumni participated in the conference launching a new Track II working group, the Young Leadership Forum. The conference received great coverage in the national and international press, such as in the New York Times and the Jerusalem Post.

While the Institute hosted participants at the 3rd Annual Track II Environmental Forum, our Academic Program took our 60 students and interns on a field trip to visit communities in the Negev, and explore the challenges and complexities of life in a desert climate. The study tour included visiting Mitzpe Ramon, an Israeli development town, and a Bedouin village. The tour met with its own challenges due to bad weather and to the flare up between Gaza and Israel. Our students’ safety is always our highest priority, so the program shifted plans, and the group came back early, joining the conference.

Less than a month after the Israel Ride, the Institute’s Short Programs Department opened a 3 week MASHAV course on Renewable Energy as a Catalyst for Regional Development, hosting 24 engineers and energy professionals from the developing world. This workshop’s participants come from 21 different countries in Asia, Africa, South American, and the former Soviet Union. After over 10 years of developing renewable energy as a critical element in our region, 70% of the daytime electricity used by the 10 Kibbutzim in the southern Arava and the city of Eilat is supplied by solar energy. Once the region finds an economic and sustainable solution to energy storage, more solar fields will be built and the region will supply itself with all of its energy needs, possibly becoming an energy exporter. These engineers and energy professionals from the developing world have the opportunity to see first-hand this technological leap forward and explore how such a leap can be taken in their home communities. MASHAV is the Hebrew acronym for the Center for International Cooperation, a program of the Israeli Ministry of Foreign Affairs initiated by Golda Meir when she was Israel’s Foreign Minister.

On November 26th-29th, a few members of the Arava Institute staff and faculty and I participated in a regional workshop, together with a delegation from the University of Arizona and the Jewish National Fund. The workshop was dedicated to developing a Joint Institute for Global Food, Water and Energy Security. Last summer in Arizona, we discussed the establishment of a joint initiative to provide applied research, extension services, and professional training to vulnerable communities in the developing world. The joint institute would, at least initially, be funded by the JNF. The workshop, held in the Arava valley, was used to continue discussions started in the summer, to refine the proposal, and to build a work plan and a budget. The Arava Institute would be one of the partners in the initiative along with 8 other research and academic entities from the Arava Valley as well as the University of Arizona and the JNF.

To close the month, we were proud to be one of the sponsors of Israel’s Third annual Climate Conference, organized this year by an impressively wide coalition of Israeli environmental civil society organizations. The day aimed to influence Israeli climate policy, by placing key issues at the center of discussion, including changing current policy, building a long-term strategy, and looking at urban resilience and sustainability. The day began with 14 round tables on a wide array of topics, including biodiversity, public transportation, food and agriculture, education, public health, consumption, and media. Institute representatives participated in a round table on cross-border cooperation and climate change, as well as a panel on the topic in the second half of the day. The conference brought much attention to the urgency of climate change, the necessity of changing Israel’s policies, and gave opportunity for stake-holders, activists, and academics to interact and advance these important issues.

Learn more about the Israel Ride