Our Journey with the Dialogue Project

Taking part in the Arava 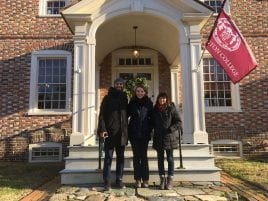 Institute’s Dialogue Project was an eye-opening experience. Throughout 21 days, we traveled through seven states and spoke at 12 university campuses and 13 community gatherings across the country. Our mission was to promote the work and educational programs of the Arava Institute. At each event, we engaged our audience in an open dialogue on environmental and political conflicts in the Middle East. The Dialogue Project can be described as a three-week long intensive public speaking exercise. We spent long hours together in cars and on planes. There were times when we were exhausted and in need of showers, and occasionally had to work through a disagreement amongst our team. Through it all, we learned how to work together peacefully, in true Arava fashion.

We found ourselves charmed by the diversity of the places we visited. Each city and town that we visited had it’s own unique vibe and culture. We were entertained by how quickly Mohammad could find a hip café wherever we went. We felt right at home in New Mexico, Arizona, and Western Texas, which reminded us of the Arava Desert. The best part of our trip was definitely the people we met. We connected with dozens of Arava Alumni and heard how the Arava Institute shaped their careers and lives. We met with Israel Riders and Institute supporters, all of whom were incredibly passionate about the Arava Institute’s mission and helping in any way they could.

We were surprised by the knowledge and perceptions that North Americans have of the Middle East—particularly with Israeli-Palestinian relations. We will never forget the reaction of the airport security officer who asked for our passports before we boarded our flight in Washington D.C. “Wow,” she said with a smile, “an American, an Israeli, and a Jordanian traveling together…you don’t see that everyday!” A border security officer in New Mexico asked us, “what would an American, an Israeli, and a Jordanian be doing driving through New Mexico?” We responded that we were speaking at universities on the topic of environmental peace-building in the Middle East. The look of skepticism on his face was both entertaining and motivating. These reactions validated the need for our work.

We are still processing and reflecting on the entire experience. For Mohammad, the many campuses and various faculties we spoke to inspired him to look into graduate programs offered in North America. For Illana, this speaking tour helped her see the many possible paths she can take in the next step of her career, both professionally and academically.

“The Dialogue Project is an experience I highly recommend to everyone in our alumni community. If I could, I would do it all over again in a heartbeat.”—Mohammad Azraq, February 2019

“The Dialogue Project was such a powerful experience for me…I feel connected to our strong Alumni community—I have helped with many events and projects [in the past]. It was only natural for me to apply for the Dialogue Project, to represent the place that made such a change in my life.”—Illana Leizin, February 2019