Prosperity to Peace – Track I and Track II Negotiations 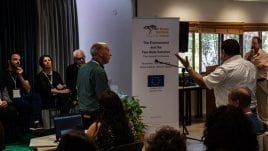 In 2016, the Arava Institute launched the Track II Environmental Forum to advance cross-border environmental agreements between Israel, the Palestinian Authority, and Jordan. Our Track II process is based on an equal partnership with our Palestinian colleagues, addressing each side’s own self-interest in solving environmental and humanitarian problems in the region; and on bottom-up solutions, which build trust towards a viable two-state solution. While we welcome any effort to revive a Track I negotiation, for it to be credible it must follow the same basic principles: equal partnership between Palestinians and Israelis, addressing each side’s own self-interest in solving security concerns, national aspirations, economic, environmental and humanitarian problems in the region; and a process that builds trust from the bottom up and the top down. History has clearly taught all of us that attempts by one side to force its will on the other will not lead to peace but to an extension of the intractable conflict that has plagued the Middle East for a century. We urge the US and the international community to adopt our Track II approach, which fosters mutual respect, and through communication and negotiations, enables both sides to be equally heard, equally recognized, and equally secure.

* Track II (citizen) diplomacy is a process usually facilitated by non-governmental actors. Track Two Diplomacy is an “unofficial, informal interaction between members of adversary groups or nations that aim to develop strategies, to influence public opinion, organize human and material resources in ways that might help resolve their conflict.” (JV Montville, 1991)
Track I diplomacy is a government facilitated process.