Cold comfort for a planet threatened by global warming 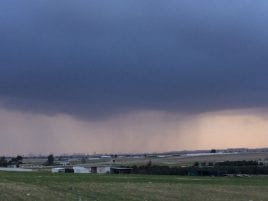 According to the latest report from the UN Intergovernmental Science-Policy Platform on Biodiversity and Ecosystem Services, more than 1 million species are threatened with extinction; more than at any other time in history. The current rate of species extinction is higher than at any other time in the last 10 million years, and is accelerating. The human species however can take cold comfort from the threat of global warming to planet Earth and the subsequent threat to the species of our planet. In his 2007 book “The World Without Us”, journalist and author Alan Weisman presents an elaborate thought experiment, using the most relevant scientific knowledge to describe what happens to the planet once the human race has gone extinct. Due to our own dependence on the existence of millions of other species to pollinate the plants which produce our food, to break down biomass and to provide nutrients for soil, to cleanse our water and to produce the very oxygen we breath, the massive and unprecedented loss of our fellow species from climate change, habitat destruction and run of the mill pollution is a threat to our very existence. No one knows at what point the loss of species on the planet threatens the existence of our own species. We do not know the tipping point when life on earth becomes untenable for human beings but at the current rate of extinction, there is a distinct possibility that our children or our grandchildren will find out. The good news, according to Weisman, is that the earth will recover within 1,000 years of the disappearance of the human species, the last signs of human existence will disappear and nature will take back the planet. Obviously many of the species alive today, including us, will be replaced by other species, many unrecognizable to us; the point being that the Earth and Mother Nature are agnostic to global warming and the crises we human beings have created for ourselves. We perhaps can take cold comfort from this fact but I for one do not believe we should be agnostic about the future of the human species. I am certainly not agnostic about the future of my children and grandchildren. The recent International Plant Protection Convention report on climate change calls for a massive transformation of our societies and our economies, of the very way we live our lives, in order to prevent the average temperature of the Earth going above the 1.5 degrees centigrade target. This will require a global effort to save humanity like the kind we often see in science fiction movies: When the survival of the human race is threatened by an alien invasion, US, Russian, Chinese, Israeli and Syrian forces band together to fight back for the sake of saving humanity – where is Will Smith now when we need him?