Water from the air: New Israeli initiative to pilot a solution for the lack of drinking water in Gaza 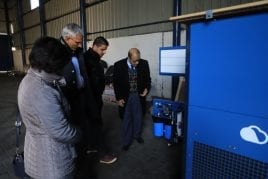 The lack of clean drinking water in Gaza has become in recent years a real crisis which threatens the existence of residents of Gaza. According to the United Nations Committee for Development and Trade, 95% of Gaza’s ground water is not fit for drinking, and if we do not take meaningful steps in the upcoming year, very soon there will be no drinking water there at all.

This complex and unique situation, which is expected to have consequences sooner or later also on Israel, requires creative and unconventional solutions.

Yesterday Palestinian – Israeli cooperation led to the dedication of a sophisticated system which produces clean drinking water from the atmosphere, in the Municipality of Abasan Al-Kabira in Gaza.

This cutting-edge pilot-project is the fruit of far-reaching cooperation between the Arava Institute for Environmental Studies at Kibbutz Ketura, and the Palestinian organization Damour for Community Development, the Watergen Company who developed the technology, and the Abasan Al-Kabira Municipality. The pilot is funded by the generosity of the Kennedy Leigh Foundation, as part of the Arava Institute’s Track II Environmental Forum, funded by the European Union Peacebuilding Intiative. 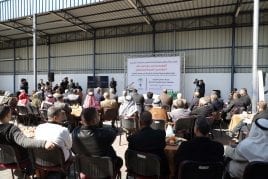 The dedication event was attended by the Minister for Local Government, the mayor of Abasan Al-Kabira, Damour representatives, and local dignitaries.

At first the pilot device, GEN-M, will provide approximately 700 liters of drinking water a day to the municipal building, and in order to provide a steady supply of electricity, the device will be connected to solar panels. If the pilot meets its goals, the Arava Institute will advance with its partners the provision of additional equipment to produce drinking water from the air in Gaza.

The introduction of WaterGen into Gaza is not only a proof of concept for a cutting edge technology but a proof of concept that Palestinians and Israelis can do more than launch attacks at each other. We can, instead, work together to improve lives, solve humanitarian problems, build trust, and restore hope.