Passover celebrations in the midst of the coronavirus – a student view 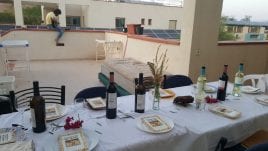 Passover celebrations all across the Jewish world this year looked radically different than anything we have seen before, this goes without saying. Already, dozens of pictures are flooding social media showing how families and communities adapted their customs to the rules of ‘social distancing.’ In this way, the Arava Institute was no different; the entire community overcame countless obstacles to celebrate Passover in the most meaningful way possible. For much of the Jewish world this spring, Passover, the holiday that epitomizes freedom in the Jewish narrative, is a story of finding freedom despite isolation. At the Arava Institute this spring, however, Passover is a story of celebrating our community and being together.

Under normal circumstances, Passover break is a time where participants in the program have an opportunity to split up, travel, and experience the holiday individually. The campus is usually closer to empty, and those who choose not to travel get to participate in a Seder prepared by the members of Kibbutz Ketura. On the eve of Seder this year, in contrast, our campus was more alive than it has ever felt.

Due to the national and kibbutz coronavirus restrictions, the entire Arava Institute community of sixty would have to be on the Kibbutz over the holiday. Gathering in groups larger than ten people to celebrate, however, was forbidden. Rather than letting these rules limit the possibilities, the Arava Institute family came up with creative ways to work with the restrictions as guidelines for a new, unprecedented Passover experience. A group of over a dozen campus leaders rose to the occasion and volunteered to ‘host’ six unique Seders. Through an amazing amount of work and preparation, the hosts each designed a unique flavor for their Passover Seder; and they coordinated resources from the kibbutz through the dedicated campus life team and program administrators.

As the sun rose over Jordan’s red and brown mountains on the day of the seder, the atmosphere of a holiday was palpable. Most people slept in extra late because of the break from classes and the long night ahead of them. By noon, every residential unit had several cultural dishes sizzling and stirring for the evening. At a certain hour of the afternoon, a hush fell over the Arava Institute as dozens of students and interns all made phone calls home to a score of different countries, connecting with the people that they perhaps had planned on seeing this week. Despite being separated from home, however, there was an intense feeling of gratitude among everyone that the Arava Institute would be together for this holiday and not involuntarily spread out across the world as was the reality for so many.

In a matter of minutes as the sun set, tables unfolded, tablecloths spread, and every last reserve of wine appeared. Residential units transformed into the most formal dining halls, decorated with bouquets of fresh desert flowers and laid with a diversity of cuisines. Institute participants all dressed in beautiful holiday outfits (many upcycled from second-hand fabrics) gathered into ‘families’ of ten or fewer. Mizrachi customs, political discussions about freedom, and spiritual meditations all took place simultaneously in six different corners of campus. The diversity of styles at the Seder tables allowed space for all of the members of the community, no matter their background, to have a rich, fulfilling, and fun night. Even the participants who had never experienced a Jewish holiday before this semester felt comfortable contributing and participating in their Seders. For hours under the full moon, the Arava Institute campus rang with a hundred songs about springtime and freedom. It was the kind of Seder eve where everyone forgot where the Afikoman was hidden but didn’t care since nobody wanted the night to end.

Also: Read about this spring’s Easter and Ramadan celebrations on the Arava Institute campus