A hate crime on the campus of the Arava Institute

Sometime between Friday night, May 14th, and Saturday morning, May 15th, at the end of Eid al-Fitr, unknown individuals painted a hate statement against Arabs on the wall of one of the Arava Institute’s dorms. The staff of the guest house, located next to our campus, were the first to spot the graffiti, and immediately alerted the head of security on Kibbutz Ketura, who then called me around 8:00 on Saturday morning. There were about 15 students on campus over the weekend, including one Palestinian. The other Arab students had all gone home for the holiday. Dr. Tareq Abu Hamed also happened to be at Ketura over the weekend together with his family. The academic department staff, including Tareq, and I met to decide what to do. It was still early on Saturday so only a few students had seen the graffiti. We decided on the following steps:

Shortly afterwards, the two General Secretaries (Community leaders) of Ketura came to the campus to check in with us, and see what needed to be done. They decided to publicize the incident to the entire community. The General Secretaries issued the following statement:

We woke up this morning to hateful graffiti on the wall of the Arava Institute student dorms calling for “Death to Arabs”. Of course this heinous act does not reflect the values of the kibbutz or its members and we are deeply saddened that the students were exposed to such an attack from within our community. It is sad and disappointing to discover that in a kibbutz which raises the flags of pluralism, coexistence and cooperation, racism can rear its ugly head. It is important to state that we condemn in the strongest possible way such expressions of hatred, and we will work to identify those who are guilty of this crime in order to reject this type of behavior from our community. During this complicated times, we ask for solidarity and pray for peace.

Cathie and Tareq stayed on campus most of the day on Saturday, and together with the students decided to convene a meeting in the afternoon. In parallel, a number of members of the kibbutz asked to be able to meet with the students in the evening in order to express solidarity and support.

Students and staff met in the student lounge on Saturday afternoon. An additional 10 or so students joined by Zoom, including a number of Palestinian students. The one Palestinian student, who had been on campus during the incident, said that it is not unusual for him to feel unsafe in Israel but up until now, he had always felt safe on Ketura. After that morning’s incident, he did not. Other students talked about how upsetting the situation was, and wanted to know what the Institute and the kibbutz would be doing about it. The plusses and minuses of heightening security arrangements on the campus were raised. Mostly, the students wanted to talk about what action they could take. There were two main ideas discussed: creating a community covenant to express community norms, which would involve kibbutz members in the process; and painting a mural on the wall where the graffiti had been covered over, expressing peace and communal growth. The mural would include handprints of students, staff, and kibbutz residents together. Some of the students wanted to hear what the Institute had to say about the bigger issues in the region, like the occupation and the ongoing violence.

One of the members of the kibbutz came to the meeting to express her shame and outrage about the graffiti. She asked if it would be ok to hold a solidarity vigil that night on campus. The students liked the idea, and plans were made for that evening including a few speeches, songs, and tea.

The gathering was called for 8:30 pm and a message about it went out on the kibbutz Whatsapp group. In the evening a group of about 100 people gathered on campus, including kibbutz members, kibbutz children, volunteers, and students. It was very moving to see such a big turnout. A few students spoke, including a Palestinian student, who related his own feelings of insecurity and the fact that such a large turnout of support from kibbutz members had renewed his feeling of security on Ketura. Members of the kibbutz spoke as well. One of the members, Ayelet Eshchar, concluded her speech with the following words:

It’s exciting and strengthening to see all the partners in this journey who came here today to say – what happened here is not our way and does not represent us. The pain we feel motivates us to join forces in making a different voice – along with many, many others from across the country in recent days, who join hands, Jews and Arabs, and refuse to be enemies!

After the more formal part of the evening, we walked over together to the site of the hate crime, sat together, drank tea, and talked informally. 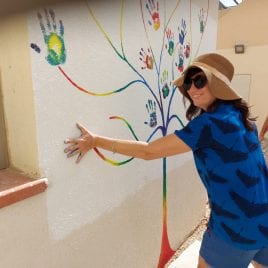 The issue of Arab-Jewish relations is not one we usually discuss on Ketura. I think we assume that racism and hate are not part of our community. This incident proved that even in a progressive community like Kibbutz Ketura, which has proudly hosted the Arava Institute and its students for 25 years, we are not immune to bigotry and intolerance. Sadly, tribalism exists everywhere, as we saw throughout Israel in the past few weeks. The only way to rid ourselves of these dark aspects of our community and our society is to shine a bright light on them. The Arava Institute is committed to maintaining an open and honest dialogue on our campus between our students, staff, alumni, board members, members of the kibbutz, and our partners in the region, even when that dialogue is painful. Only through honest and direct dialogue can we defeat the darkness, and achieve a society in which everyone feels safe, equal, seen, and included.