On June 8, the Arava Institute held the first regional climate conference in cooperation with the Eilat municipality and the Hevel Eilot Regional Council. The meeting took place at the Eilat Youth Center, where over 100 environmental activists and residents gathered to raise awareness of climate change and its impact on the environment and our quality of life, as well as to create a unique civic statement addressed to State authorities. The conference was part of a nationwide initiative of regional climate conferences.

The essence of our regional conference is best summarized by the call of Elior Gaz, an Eilat high school student who coordinates the local branch of the Fridays for Future youth protest movement – “Climate or Nothing”. Elior moved the audience with his concern that his children might not see and get to know the corals in the Gulf of Eilat. He reminded us of the need to act for future generations, and called on youth and adults to join the global protest. We are all fighting this war for our lives, and the youth is fighting for its future as well. He referred to the ignorance and lack of public awareness of the climate crisis, and called for the inclusion of the subject in the Ministry of Education’s school curriculum.

The issue is very important in our region specifically. In his introductory remarks to the conference, Arava Institute Executive Director Dr. David Lehrer addressed the consequences of the crisis for Israel and our region: “The climate crisis is not only a global crisis, it is also a crisis of the State of Israel, and a crisis of the residents of the Arava and Eilat in particular. The extension of the summer season by two months and the shortening of the winter season by two months will result in fewer rainy days in our region, an expansion of desert and hyper arid areas, and a reduction of Mediterranean climate areas; it is a threat to biodiversity, and will lead to water shortages and damage to agriculture. In the Arava and Eilat, the rise in temperatures as a result of the climate crisis harms the coral reefs, as well as local tourism, and increases energy expenses.” Dr. Lehrer further emphasized the erroneous policy of the State of Israel which supports a fossil fuel economy. Israel insists on being part of the oil industry, and promoting giant polluting infrastructure projects – such as the Eilat-Ashkelon Pipeline that poses a formidable threat to our region.

During the conference’s keynote address on “Climate, politics, and all that’s in between”, Miki Haimovich, former chair of the Knesset’s Committee for Interior Affairs and Environment, spoke about her journey in environmental and climate activism. She urged us to believe in the ability of residents to influence and change environmental policy in Israel.

The event continued with a series of short lectures as an introduction to discussion groups on various topics. Rina Kedem from Kibbutz Lotan, Co-director of the Arava Institute’s Jordan-Israel Center for Community, Environment, and Research, spoke about the impact of climate change from an Israeli-Jordanian cross-border outlook. Kedem emphasized the importance of connecting communities in our area: Eilat and Aqaba, for example, share the same climate (and the Red Sea of course), have similar population sizes, and are both removed from other population centers.

Dr. Assaf Zvuloni from the Nature and Parks Authority emphasized the global importance of the Eilat coral reef due to its relative resilience against the effects of climate change. Dr. Zvuloni explained how conservation of local reefs minimizes climatic effects on the reefs globally, and called on the audience to preserve this local asset.

Dr. Yehiam Schlesinger from the Society for Conservation of the Red Sea Environment spoke about the threat posed by the expansion of the Eilat-Ashkelon Pipeline, and the transportation of oil from the port of Eilat via the Arava to the port of Ashkelon. The potential for pollution in the Gulf of Eilat as a result of the project poses real danger to the coral reefs, and is also a health and environmental risk to all residents of the Gulf, and along the entire pipeline.

A summary of the residents’ positions as expressed at the conference will be submitted to the Eilat Municipality and the Hevel Eilot Regional Council, and will be included in a comprehensive position paper by the national initiative of climate conferences. The event was documented by illustrator Tal Kamil, who created a graphic summary of the conference content. 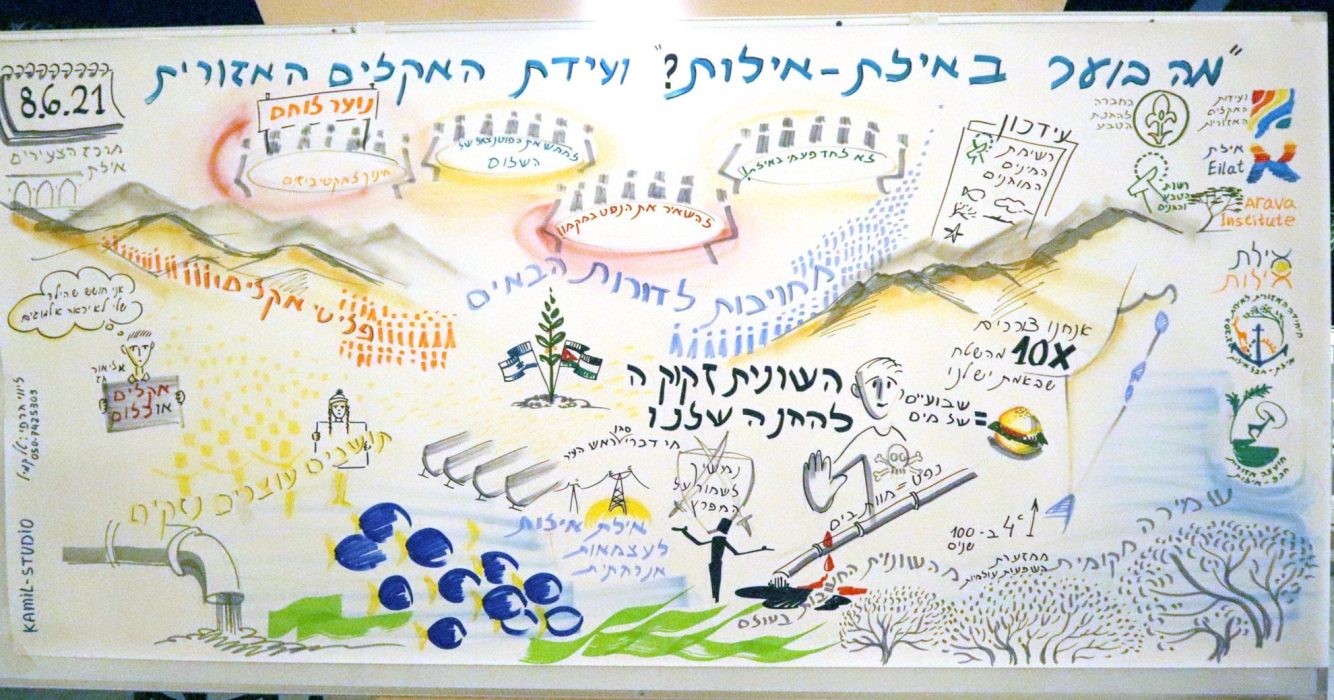 The conference was organized by the Arava Institute for Environmental Studies, and the Eilat-Eilot Environmental Unit, in partnership with a broad coalition of organizations in the area, including: Eilat-Eilot Renewable Energy, the Company for Economic Development of Hevel Eilot, the Dead-Sea & Arava Science Center, the Society for the Protection of Nature, the Nature and Parks Authority, the Society for Conservation of the Red Sea Environment, the Association for Healthy Environmental in the Arava, as well as the Hevel Eilot Regional Council, and the Eilat Municipality.