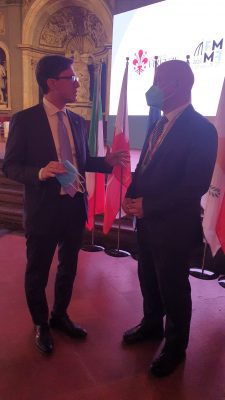 The cultural richness and diversity of the Mediterranean are exceptional. There are however important development discrepancies between the European Mediterranean countries and the southern Mediterranean and Middle Eastern countries. These discrepancies are growing rapidly because of population growth in North Africa and the Middle East, which has increased by 350 million in the last 60 years. The Mediterranean region faces unequal distribution of resources, political instability, conflict, and migration. In addition to these social factors, the Mediterranean Basin is considered a climate hotspot, and the impact of climate change is greater compared to other regions in the world.

The Forum was attended by delegations of Mayors from 20 different Mediterranean countries. The objective was to re-launch interest in the Mediterranean area, through dialogue between its main cities, promoting supportive action for cooperation and peace. The goal is for the Mediterranean – a crossroads between Western and Eastern civilizations, between the north and the south of the world – to again play the role of bridge between cultures.

The Mediterranean Mayors’ Forum began on Friday, February 25th, with opening speeches by the Mayor of Florence Dario Nardella, UNESCO Director General Audrey Azoulay, and Antonio Decaro, Mayor of Bari and President of National Association of Italian Municipalities. The conference was dedicated to cultural projects, health, security, social promotion, and environmental and energy issues. During the latter I gave a keynote address about the implications of climate change on the Mediterranean, and the cross-border work of the Arava Institute. The second day began with a joint session between mayors and bishops, and was then concluded with the definition of the Florence Declaration which was signed the same day.

During the conference I connected with several mayors; including the mayors of Florence, Rabat, Izmir, Jerusalem, and the vice Mayor of Tel Aviv. I was also interviewed by the La Reppublica news paper. It was an exciting opportunity to join this conference of municipal decision makers from all over the Mediterranean region, and to form meaningful connections with potential partners.