David Lehrer: My year in Boston 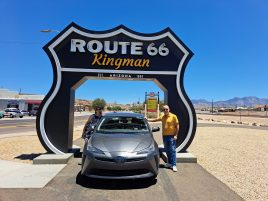 I left on sabbatical in August 2021 to teach at Boston University (BU). Besides a visit for the semester break, during which I had the privilege to participate in the Arava Institute’s 25th anniversary event in Tel Aviv in December, I did not return to Ketura and the Institute until the beginning of July. Spending two semesters at BU, I was hosted by the Elie Wiesel Center for Jewish Studies (EWCJS) as a Postdoctoral Teaching Associate, and an Israel Institute Fellow. I taught the same two courses both semesters. One course was called Israel: History, Politics, Culture and Identity and was accredited by the Jewish Studies Department. The second course was called Global Resource Geopolitics: Natural Resource Development and Conflict, accredited by the Earth and Environment Department. Both Departments are part of the College of Arts and Sciences at BU. By the second semester, both of my courses were more or less full with 30 students in the Israel course, and 25 in the Natural Resource course.

BU is a massive university with over 30,000 students. The campus is located in the center of Boston along Comm. Ave. (Commonwealth Avenue for you non-Bostonians). I rented a studio apartment on Bay State Road just a block and a half from my office at the Elie Wiesel Center, and about three blocks from the campus where I taught. I had no need for a car, and got everywhere by walking, bike, bus, or the “T” (Boston subway). The staff of the EWCJS made me feel right at home. I had a beautiful office overlooking the Charles River, and access to the library next to my office which looked like a room you would find at Hogwarts. In addition to teaching two classes it was also my responsibility, as the Israel Institute Fellow, to organize campus wide programs on Israel. Over the year, I organized programs at the local Hillel, the EWCJS and the student union. Programs included talks about Israel and the environment, the work of the Arava Institute, and Israeli music. I hosted an international delegation from Sharaka, an organization dedicated to strengthening ties between Israel, UAE, Bahrain and Morocco. With the help of the Friends of the Arava Institute (FAI), we hosted a large event in the fall welcoming the new Executive Director of the Arava Institute, Dr. Tareq Abu Hamed, to Boston.

Despite what you may have read on the internet, and hear from friends and family regarding the hostile atmosphere on US campuses towards Israel, I did not encounter such hostility. I am not saying that it does not exist, even at BU, just that I was never exposed to it despite my very public Israeli programming. In the Israel course, we covered very difficult and politically sensitive issues including wars, occupation, terrorism, minority rights and so on. While there were often disagreements between students, and even at times disagreements between myself and students, the discourse remained civil and respectful. I believe that the students appreciated the openness in my class to voice any opinion and to enable multiple narratives. Though not quite a Peace-building Leadership Seminar session, the course was clearly influenced by my years at the Arava Institute.

In addition to my work at the university, I also aided the Friends of the Arava Institute’s (FAI) fundraising campaign by travelling to places around the US over weekends and during semester breaks. I spent a weekend as a Scholar-in-Residence in Milwaukee, Wisconsin, hosted by Congregation Emanuel Bnei Jeshrun, and I travelled to other cities like Washington DC, Dallas, and Seattle to meet donors and strengthen relationships. In addition to my work with the FAI staff, I continued to monitor the work of the Track II Environmental Forum. I used the quiet time in Boston, without my former distractions of managing the Institute, to submit grant requests for funding for Track II and other aspects of the Arava Institute.

In mid-March, my wife Barbara, who had chosen to remain behind in Israel with the grandchildren instead of coming with me to Boston in August (go figure), finally joined me for my last three months in the US. Barbara moved in with me in our small studio apartment on the BU campus. The apartment was ideally located for getting to know Boston since we were around the block from Kenmore Square, a main hub for the “T” and buses. Barbara took full advantage and visited museums, parks, restaurants, and lots of stores. We both got to know downtown Boston well. We took the Freedom Trail tour, the Duck Tour, visited Cambridge, and spent time in the Commons and Boston Gardens. During good weather, I rode a bike along the Charles for exercise, and during bad weather, took advantage of the BU sports center.

Barbara and I have many friends in Boston from Young Judaea, from the Israel Ride, and from FAI. Before Barbara arrived, I was treated to many Friday night dinners by old friends. After Barbara’s arrival, the invitations for home cooked meals or for eating out were so numerous that we almost ran out of nights. Of course what would a stay in Boston be without a Red Sox game at Fenway Park, a 10 minute walk from the apartment? The Red Sox lost the two games that I saw of course (the Red Sox s%ck).

After the end of the second semester at BU, Barbara and I planned a 6 week cross-country trip to see friends, family, and national parks. We were about to leave the almost empty apartment when, despite being vaccinated, and having avoided infection until then, we both came down with COVID-19. We were now stuck in the almost empty studio apartment for five more days – no coffee machine, no microwave, and only a wok and a bed.

We finally left Boston on our cross-country trip in mid-May. We were very lucky that the rental car agency rented us a Toyota Prius. The gas mileage was amazing, and just when the gas prices were skyrocketing. We started by heading south, visiting our families in Connecticut and Brooklyn. We then headed for Philadelphia where we were hosted by Hersh and Betsy Richman from whose apartment we could almost see Rocky. Barbara tasted her first (and last) Philly Cheese Steak. On our way to my sister in North Carolina, we stopped by Brenda and David Jaffe’s beautiful Chesapeake Bay front apartment and had delicious crab cakes. From North Carolina, we headed back north towards Wisconsin and Chicago to visit Barbara’s family, then back south towards Nashville. Due to a family engagement, we made a brief break in our trip, flew to Maine via Boston, saw our Boston Friends, David and Aviva-Lee Parritz, and Jeff Borkan and Suzanne Jacobs. While in Maine we visited breathtaking Acadia National Park. Flying back to Nashville, we picked up the car, and headed west towards Oklahoma City to visit Barbara’s family. From there we drove to Denver Colorado and stayed with Michael and Laurie Marcus. Next we climbed up (in a car) to the Rocky Mountain National Park, and spent the next week visiting Arches, Grand Canyon, and Sedona. Our next stop was Las Vegas, but as everyone knows, what happens in Vegas, stays in Vegas. We made it to the West Coast, the last week of June, watching the sun set on the Pacific in San Diego, seeing the homes of the rich and famous in Beverley Hills, and then driving up the Pacific Coast Highway. In LA we had the opportunity to see Honey Amado Kessler. We ended our trip at Hillel and Judy Soloman’s Hotel California in Berkley. We also had the chance to catch up with Eric Berzon and Danielle Ruymaker.

It was an amazing year and an amazing trip but Barbara and I are very happy to be home among our children, grandchildren, and friends. I have started my new position at the Institute as Director of International Development, and I am sure I will have a great deal to report over the coming year.