We left a group of five – 2 Palestinians, 2 Israelis and a Jordanian, speaking 3 languages between us. Ironically, we were delayed at the Egyptian side of the Taba border crossing over a translation misunderstanding. The Egyptian border police took issue with the slogan on our roll-up – Working for climate resilience and justice in conflict areas – Via google translate, they had confused ‘resilience’ with ‘resistance.”

But without much mishap we crossed the border and made our way to Sharm . 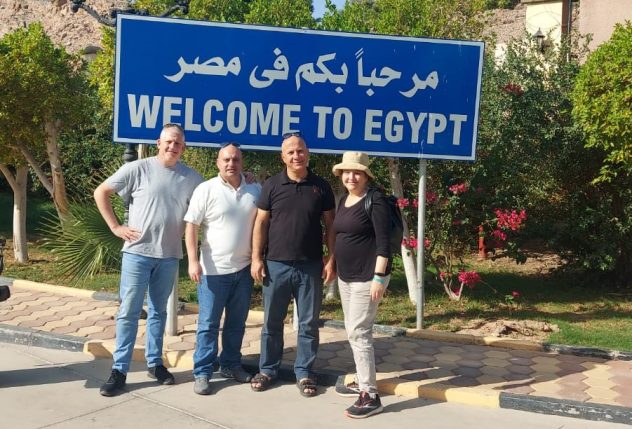 Sunday is a rest day at the COP and we got settled in, met friends in the evening, and lucked upon a parade of local Egyptian culture.

Last year at Glasgow, I wrote about the different levels of conferences basically occurring at the same time – the UN and governments, local governments, corporations, organizations, and activists. There is a built-in contrast between goals of the COP and its methods – Flying in from all over the world while wanting to make a difference about climate change.  This is increasingly true every year as the COP grows in size and scope and is especially true here at COP27 in Sharm.  Sharm is a resort city that was expanded to accommodate the conference in ways that hardly seem useful in the long run. Activists have shared photos of sewage from the COP conference hall flowing freely into the desert at one spot – perhaps a visual symbol of the whole COP itself.

On the official UN level of negotiations, the Egyptian presidency of the COP has put much emphasis on adaptation and on ‘loss and damage’ finance. Having just arrived, it I unclear to me from brief conversations with government representatives just how negotiations are going in terms of how it feels for those here in the rooms. An Israeli representative said today at the daily briefing for Israeli delegates that while the progress is slow it can be solid. He described his appreciation of the need to agree on each sentence of an agreement and then when that is solid moving to the next sentence. I met a British government representative negotiating on mitigation when she sat opposite me while writing this. I asked her if there is any hope and she responded – ‘always.’ She echoed the sentiment that incremental movement toward the goal is better than none.  For activists, this is unacceptably slow.

A coherent mobilized international commitment is needed to reduce emissions to limit the global average temperature rise to 1.5 degrees Celsius.  In Glasgow, this goal remained politically viable, but weak.  One focus at Sharm is implementation and the requirement that nations submit clear agendas.

The focus on adaptation may feel like a moving away from the mitigation emphasis but has important climate justice implications. The rich of the world are and need to be more responsible for their historical contribution to the climate crisis. At the COP, in addition to official negotiations on loss and damage financing, there are content sessions on climate justice, climate mobility, and climate resilience.

Today I attended sessions on food security and water management.  These are issues that matter for the climate resilience of communities that are under-serviced, off-grid and, in our region, suffer from deep power imbalances. I was surprised learn that 70% of agricultural irrigation worldwide is still flood irrigation. This leads to water and fertilizer wastage, wastes energy and leads as result to increased greenhouse gas emissions.  Dr. Clive Lipchin of our Center for Transboundary Water Management presented his Laguna Tech innovation. Laguna Tech is the product of years of research at the Arava Institute aimed at providing sanitation solutions to off-grid, decentralized, under-serviced communities. Using a biological treatment system of bacteria and algae, black water is recycled is to provide good quality, sustainable and reliable quantities of water for agriculture.

Dr. Lipchin stressed that food security cannot be guaranteed without water security. He stressed that the goals of Laguna tech and all such research at the Arava Institute are to use “technology as a vehicle for improving people’s lives. The approach is one of technology as an enabler for improving people’s lives. We work with communities for onsite training as part of addressing the WASH issues of the community.”

Monday evening closed with an excellent series of panels at the Israel Pavilion on Emerging Dilemmas in Climate Change Education. The Ministry of Education and The Ministry of Environmental protection in Israel have recently announced on a program for mandatory K-12 Climate Change Education starting this September. Various professionals from the government, academia and NGOs presented their philosophies, work, challenges, and successes in the field.
The panel included Dr. Tareq Abu Hamed, presenting the Institute’s approach to climate education as cross-border in order to build trust. Many of the speakers discussed the importance of place-based education and of simply bringing outdoors to education and students of all ages out-of-doors. This resonated with me after a very full day of content inside the human-constructed closed environs of the COP. The consensus of panels speakers was that it is not enough to teach the climate crisis to children but also to strengthen the connection of students to their natural environment and to encourage action.  This was reflected in Tareq’s talk as well for our college-age students. He also emphasized the importance of a project-based learning approach.
We also heard about some commendable initiatives in climate education in Israel. In addition to the K-12 curriculum initiated this school year, the Israeli Ministry of Education is the first worldwide to implement climate training for teachers.