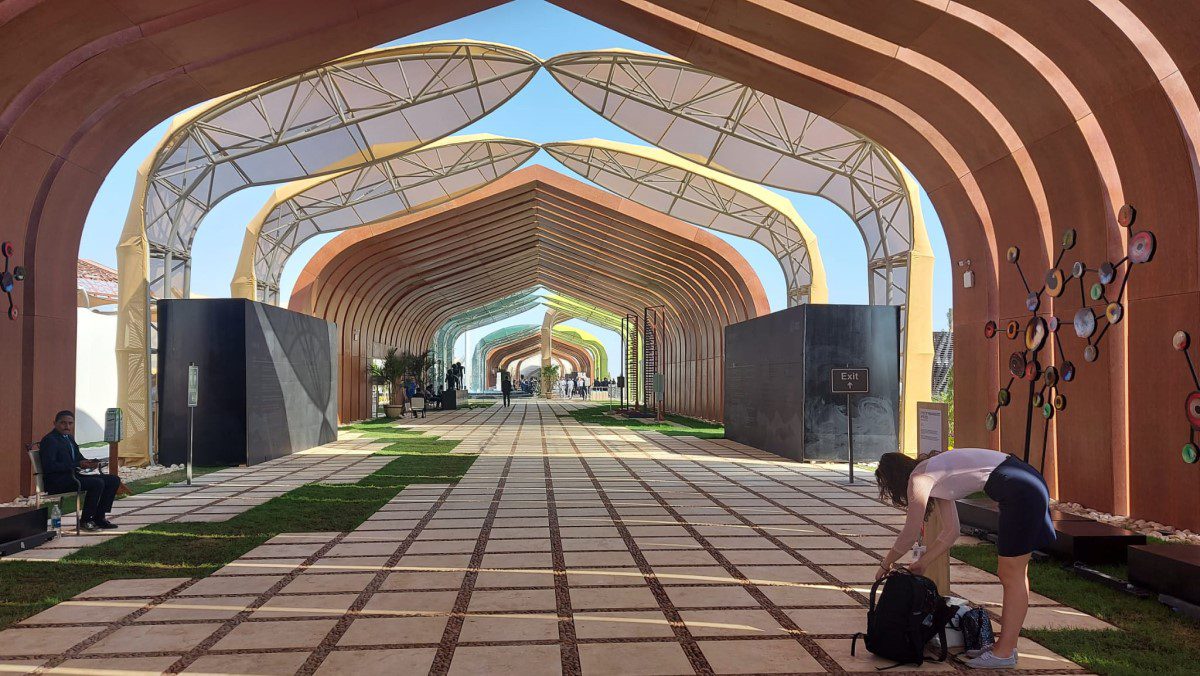 Tuesday morning with some difficulty I found my way to the Green Zone. Last year I wrote about the odd juxtaposition of small, yet important NGOs, next to the corporate greenwashing pavilions. The outer park of the Green Zone at Sharm was particularly eclectic. Some described it as bizarre, and one person called it dystopian. It had an outdoor exhibit of Egyptian sculpture made for the event about the climate crisis that ranged from noteworthy to quirky to mundane. But what stood out most for me was the combination of fairly ugly structures made from reused plastics next to entire archways of dead potted plants. I did not venture over to the pavilions in the Green Zone this year because I was rushing to hear Dr. Rina Kedem in the DANA Global Green Zone “Event on Female Leadership in Sustainable Agricultural practices: feeding the next generation and respecting the Earth.” This was a panel of 6 brilliant and inspiring women – entrepreneurs, academics, and activists. Their approach was qualitatively different than much of what I had been hearing at the COP so far.  I found it very thought-provoking and inspiring. 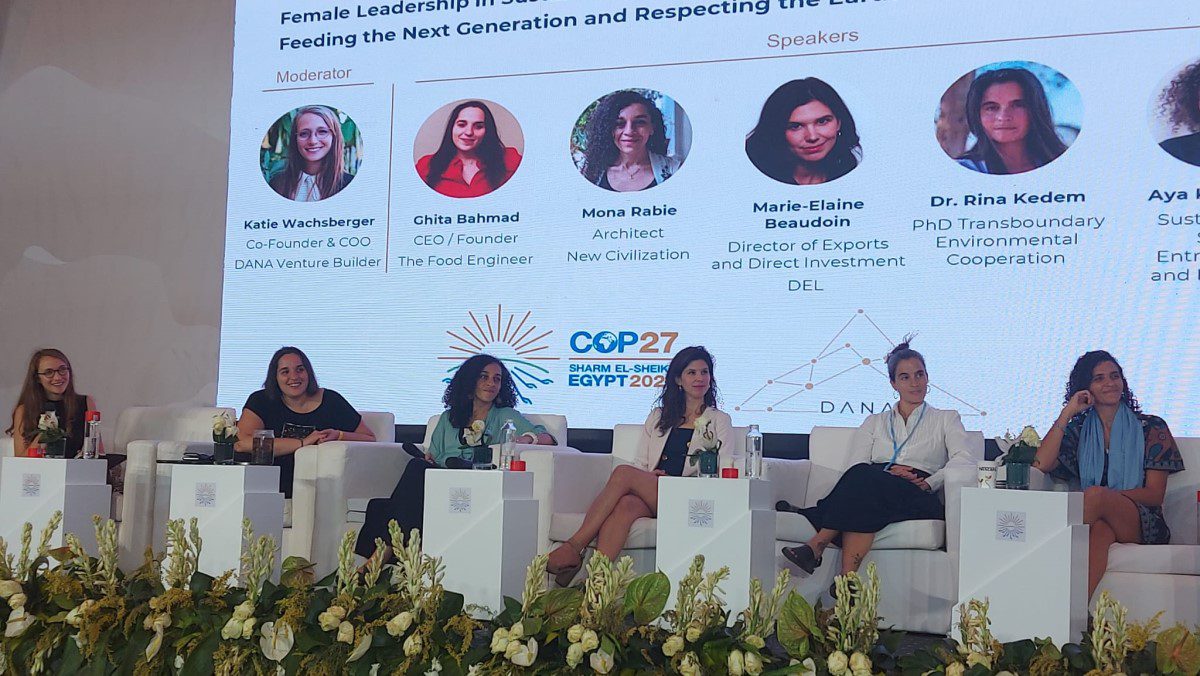 Katie Wachsberger, co-founder of Dana Global, hosted and moderated the panel with thought-provoking questions about sustainability in agriculture, innovation, finance, and female leadership. Panelists discussed sacred activism; whole health systems of the earth and humans together; Yin economy as opposed to current yang economy; de-growth; and value-based leadership to foster regenerative agriculture. One speaker reminded us that

“Sustainability is not only about soil and practices. Relations matter. Justice matters”.

On female leadership – there was a consensus on the panel that the way women do business is a culture in itself. Research shows that female leadership brings better results and yet, now it is a time to join all together to act, to find a way to walk hand in hand together.

Regarding innovation – When organizations see themselves as competing separately instead of parts of whole organism, the whole system suffers.  Healthy ecosystems for humans as in nature are diverse and share information via feedback loops.

Dr. Kedem discussed her and partners’ work on innovation through community work using human-centered design thinking. This approach creates innovation from actual needs and its results are owned back by the people and community who have the need in the first place. Complexity increases ecosystem resilience…and feminine nature knows to hold these complexities.

I left the event with many questions and thoughts raised by the panelists that I carried with me all day:

A final note on the dissonance between the content of this panel and the external surroundings of the venue – sometimes surprising, inspirational and meaningful things are found in unexpected places.

Later on, there were 2 panels on regional cooperation. The first, sponsored by the Israel Ministry of Energy was on regional cooperation as a strategy to promote a low carbon economy, and included a presentation by Dr. Nurit Gal, an Oxford Martin School fellow and partner in our Track II work. Dr. Gal described the Oxford team’s modeling work in the energy sector. Analyzed data from Jordan, Palestine, and Israel shows that regional cooperation in the energy sector increased efficiency, ability to better reach national targets, and lower costs. Panelists discussed the challenges and opportunities in regional cooperation for a low carbon economy. Practical policy suggestions included: government guarantees to reduce risks of cross-border investment; overcoming taxation challenges; setting up forums to help cross-border projects to happen; government support for regulation and infrastructure. A German Energy Ministry representative discussed the role of governments in smoothing challenges in finance, for example the chicken and egg problem of new markets. Recent Biden administration incentives in the United States for renewables were also discussed. Panelists advocated for local and regional working groups for strategy and implementation. Dr. Gal mentioned the issue of shared data – that the Oxford researchers are trying to gather together with the Institute’s Track II team – which is a necessary pre-condition to such cooperation. 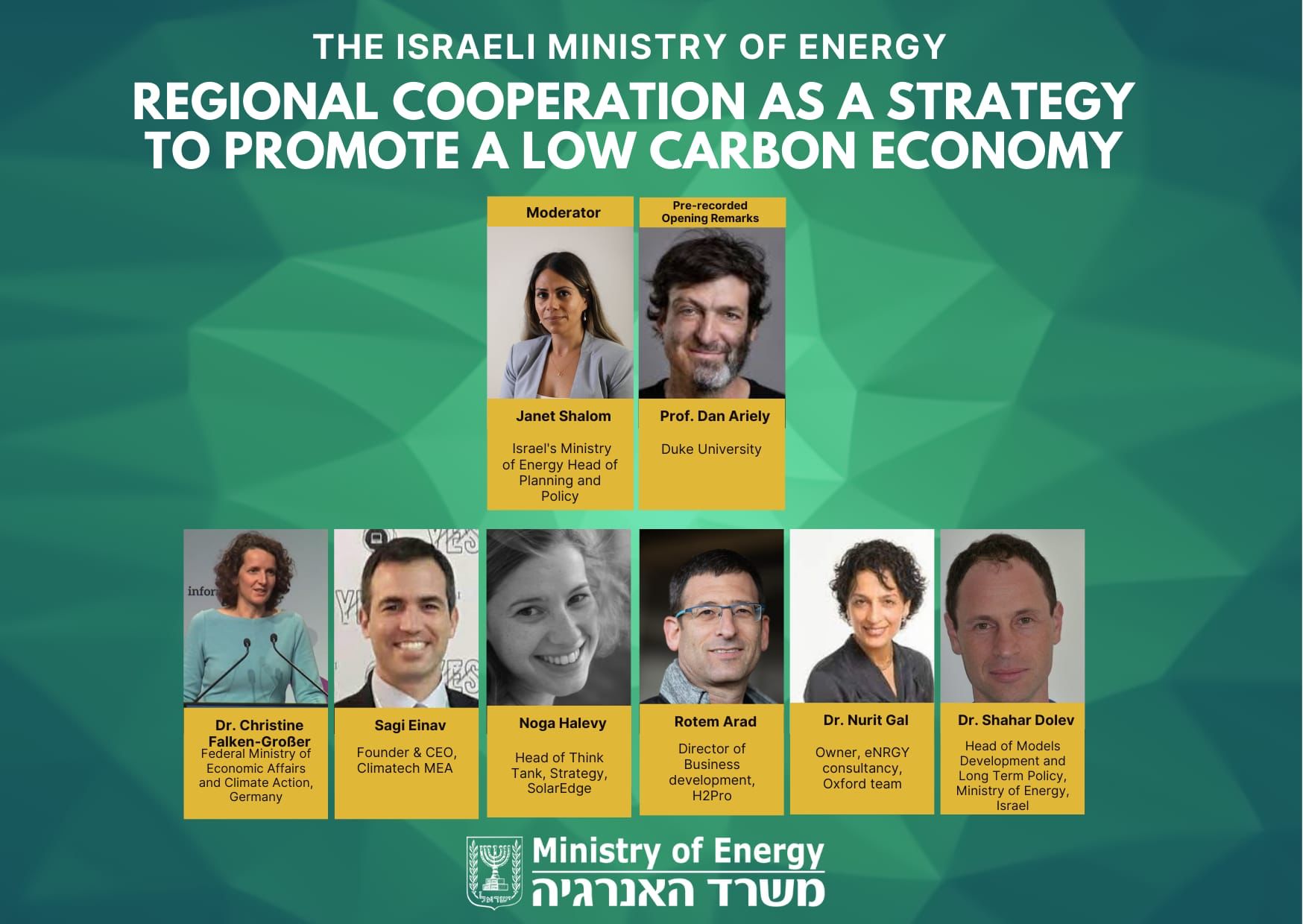 The panel was to be moderated by Prof. Dan Ariely who could not make it but sent a video reflection on why it is difficult for people to act on climate and the environment and what can we do about it. In short, Ariely claims that as humans we are challenged to act for the environment because:

So, climate change is a perfect storm of a topic to create human apathy. To get people to act, he recommends taking the desired behavior and right behavior and lining them up by making it easy and giving incentives.  He also discussed the need to make sustainable actions that are part of people’s identity.

In summary, per Ariely, from a social science perspective, you cannot ignore human nature, but rather need to build around it. Those who don’t believe will not be convinced by more information, rather we should try to deeply understand their motivations.

His brief talk resonated more for me with the education panel from Monday than with the energy policy panel, but perhaps getting whole governments to do the right thing is not deeply different than getting individuals to act.