We lost the sense that we can agree on anything, so focus on practical immediate needs that can get agreement – that will prove we can.

The Arava Institute and our Palestinian partner Damour Company for Community Development held the 4th Track II Environmental Cooperation Conference as an online webinar over four days in early December. The conference was funded by the European Union.

On the first day, Damour and the Arava Institute presented the dramatic achievements of the Track II Environmental Forum being implemented across the region. These bottom-up high impact solutions to environmental and humanitarian challenges improve lives, demonstrate the feasibility and effectiveness of modular off-grid solutions, and build trust. Select achievements include the following:

On day two of the webinar, donors from the US based Friends of the Arava Institute were invited to hear from some of the project leaders and learn first hand about the impact their support of the Track II Environmental Forum has had over the past four years. Prof. Richard Caplan and Dr. Nurit Gal, fellows of the Oxford Martin School, discussed the benefits of regional cooperation in order to facilitate secure geo-political stability and national energy futures.

On day three, practitioners convened to discuss the next projects for the Track II Environmental Forum. In 2016 Palestinian, Jordanian and Israel academics, researchers and environmental professionals met in round tables at the first Track II Environmental Cooperation Conference at the Arava Institute to discuss cross-border energy, water and climate change solutions. After four years and significant achievements, the working groups are now scaling up current projects, and turning their attention to new opportunities to impact the region and reset the narrative, through social media and new coalitions taking advantage of the shifting geopolitical landscape.

On the final day of the webinar, participants had the chance to hear experienced diplomats and negotiators speak about the shifting sands of the Middle East as a result of the Abraham Accords, the new US Administration, and what opportunities may be revealed to advance a Two-State Solution. The event was hosted by former Israeli Ambassador to France, Daniel Shek, who pointed out the need to evaluate the potential impact of these important events on future cross-border environmental projects

The program opened with a call from both former Palestinian Authority Minister Tahani Abu Daqqa, and former head of the Meretz party and member of Israeli Parliament, Zehava Galon, for genuine progress towards a Two-State Solution. Speakers included:

Dr. Deborah Sandler, Chair of the Track II Environmental Forum, closed the webinar by summing up the importance of personal relationships, partnership, and trust which has been built up over the past four years through intensive cooperation in solving environmental problems and challenges to our region.

Nov. 2018: The Environment and the Future of the Two-State Solution 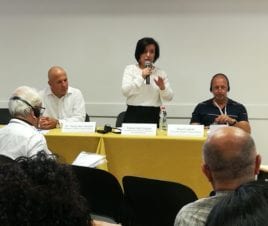 The third annual Track II Environmental Forum Conference occurred on November 13th and 14th at the Arava Institute located on Kibbutz Ketura. The conference aimed to highlight the progress of the Track II working groups, encourage productive dialogue between Track I and Track II Environmental Forum participants, and outline a pathway and work plan for the year ahead. The conference was a success despite difficult circumstances simultaneously unfolding in Gaza, which hindered the participation of several expected attendees. Despite these challenges, ninety-six participants attended, a significantly higher number than last year’s attendance of eighty-five.

Of the participants, 40% were female participants, and a variety of nationalities were also represented: 24% were Palestinian, 55% were Israeli, 6% were Jordanian, and 15% were international. The ratio of Palestinian (West Bank and Gaza) participants would have been naturally higher if it were not for the political situation over those days, with eleven individuals being unwilling or unable to attend. It is worth noting that thirty-four Gazans 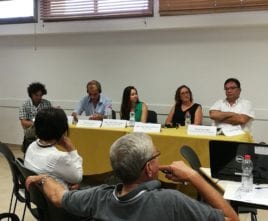 had initially registered for our permit process prior to the conference. Sadly, the timing to reach out to these individuals, foster the relationships and establish the trust to obtain relevant permit materials hindered the process, leaving limited time to process permits through the relevant authorities. Two Gazan permits were granted less than twenty-four hours before the conference, not long after the Erez crossing closed due to the escalation of conflict. 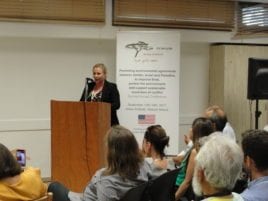 The conference opened with the acknowledgement of the stress and concern affecting many participants in the wake of the events at the Gaza border, and the audience was asked to note the absence of the twenty-five Gazans who applied for permits.

On September 13th-14th, 2017, the second annual Track II Environmental Conference was held at the Arava Institute. The conference, entitled “Promoting environmental agreements between Jordan, Israel and Palestine, to improve lives, protect the environment, and support sustainable resolution of conflict”, aimed to highlight the progress of the Track II working groups launched at last year’s conference, encourage productive dialogue between Track I and Track II Environmental Forum participants, and outline a pathway and work plan for the year ahead. It was attended by 85 participants from Israel, Jordan, Palestine and the United States, including some members of the Knesset and Palestinian politicians, as well as high ranking environmental stakeholders.

The conference was opened with welcoming addresses from Tahani Abu Dagga and Dr. Ziad Darwish from the Palestinian Committee for Interaction with Israeli Society, who praised the Arava Institute for discussing regional problems with “love and conviction”, and expressed hope for a common sustainable future in the region despite the current political situation. MK Amir Peretz also gave stirring welcoming remarks. Following opening remarks and summaries of the working process throughout the past year, participants had the opportunity to hear Palestinian and Israeli officials and stakeholders in plenary sessions focusing on different topics.

During a panel on “Recent Track I Cross-Border Environmental Agreements – Can they be an impetus for real environmental change in the region?”, Adv. Shiri Milo-Loker, a Senior Audit Manager at the State Comptroller’s Office, MK Yael Cohen Paran, a physicist with the Green Movement who is currently serving in the Knesset with the Zionist Union, Dr. Shaddad Attilli, a policy advisor for the Palestine Liberation Organization’s Negotiations Affairs Department and former PA Minister of Water and Head of the Palestinian Water Authority (PWA), Alon Etkin, representing the Ministry of Regional Cooperation, and economist Ahmad Hindi, a member of the Palestinian Committee for Interaction with Israeli Society, discussed recent research and reports, as well as conditions in the West Bank and Gaza.

The following session, facilitated by Al-Monitor columnist Akiva Eldar, focused on “advancing Cross-border environmental agreements between Israel, the Palestinian Authority, and Jordan in preparation for a two-State solution”. The topic was discussed by Dr. Shaddad Attilli, former Minister of the Palestinian Water Authority, MK Ksenia Svetlova and MK Yehiel “Hilik” Bar, Members of the Knesset for the Zionist Union, and United States Ambassador Dennis Ross, who was the point man on the peace process in both the George H. W. Bush and Bill Clinton administrations. A lively discussion developed between Palestinians speakers and Israeli members of Knesset, but all could agree on the necessity to share information and technology immediately, regardless of the current governments’ inability to engage in dialogue, to end the suffering of ordinary citizens.

On the morning of the second day, keynote Speaker Ambassador Dennis Ross addressed the audience on the role of Track II in facilitating cross-border agreements, based on the history of negotiations in the Middle East. He explained the difficulty of reconciling “two rights” from two national identities, and reviewed the history of negotiations during his time with the Clinton administration. Amb. Ross expressed his belief that Track II discussions and projects are important in creating a sense of possibility for greater Track I discussions.

Amb. Ross’ address was followed by a discussion on Gaza’s environmental and humanitarian crisis. This session included MK Issawi Freij (Meretz party), Eng. Ahmad Yaqubi, Gazan water resources expert, and Salah Mohsen, Director of the Research Department at Gisha – Legal Center for Freedom of Movement. It was emphasized that the water crisis in Gaza can be easily solved technically, and that the only barrier is political.

After a working group session that gave participants an opportunity to discuss further steps with partners in their field of expertise, the conference was concluded by David Lehrer, the Executive Director of the Arava Institute, with a closing summation, focusing on the principle that each side has its own narrative, that needs to be acknowledged. He then encouraged NGOs to work together on the issues, adding “you would be surprised what a small organization can do.”

A conference entitled “Building Cross-border Environmental Agreements between Israel, Jordan and Palestine”, held September 7-8,brought together over 50 participants who formed working groups and plan to take action  in the coming year on critical environmental needs across the region. The Institute hosted this conference as an inaugural step towards the fulfillment of its mission to advance cross-border environmental discourse.

The conference began with a video greeting from President Reuven Rivlin and an opening keynote address about the future for environmental cooperation between Israel, Jordan and Palestine  from Dr. Yousef Abu Safieh, former Chairman of Environmental Authority, Palestine.

Participants then formed three working round tables on the topics of climate change, wastewater treatment and re-use, and renewable energy. Through these discussions, committed working groups were formed to identify pragmatic issues and problems in each specific area, and begin formulating creative suggestions on how to facilitate steps towards change. By the end of the conference, each group drafted a list of practical key action points for the coming year. Issues the groups wished to address include: the challenges of wastewater in regards to Gaza; challenges of solar project in the West Bank; an Arava Valley Israel-Jordan energy water swap proposal; the drafting of a regional adaption plan to climate change based on the respective national plans. 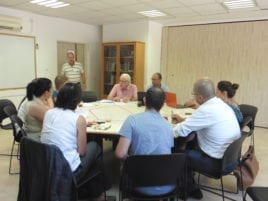 The evening keynote speaker was Dr. Yossi Beilin, former Minister of Justice, Israel, answering the question – Is cooperation feasible in the current political environment?  Dr. Beilin stressed the scarcity of jointly agreed upon workable proposals and plans on issues of environment and water for use in future negotiations and peace talks, encouraging conference members to fill this gap.

The cross-border environmental cooperation conference will be an annual event promoting dialogue between policy makers, professionals, and other stake holders, and enable them to meet on a regular basis in a secure environment; the ultimate aim being to create agreements between the countries of the region on the sustainable management of joint environmental resources