The Center of Transboundary Water Management (CTWM) is looking at methods to reduce wastewater pollution while increasing water supply to households and communities in the West Bank located outside of the region’s wastewater treatment network. Through the construction of greywater recycling systems and the development of a multi-player regional wastewater treatment network, CTWM seeks to find a decentralized solution to this important issue.

Appropriate wastewater management in the off-grid rural sector of Israel and the West Bank is essential. These communities lack the necessary infrastructure to safely treat their wastewater and more importantly to reuse treated wastewater for irrigation in a region fraught with water scarcity. This research seeks to make the case for a decentralized approach to wastewater management and reuse for communities not connected to an energy grid and with poor or non-existent sewerage infrastructure.

The research aims to promote environmental protection of freshwater sources through the promotion of decentralized, low-cost and socially acceptable sanitation treatment of household black (sewage) and gray  (washing, showering) water. Furthermore food security is enhanced by providing a secondary source of water for farming through the reuse of the treated greywater for agricultural irrigation. The holistic project approach addresses two elements; (1) technical/infrastructure, and (2) social/communal elements. The research aims to create a sustainable, replicable framework for cross border collaboration intended to expand the entire water cycle; from water resources to wastewater treatment needs in the community. Addressing this water and wastewater problem in a transboundary approach will encourage peace building through cross-boundary cooperation and mapping of waterscapes. Waterscapes are defined as the political, economic, cultural and ideological dimensions of the community’s relationship to water and its productive capacity.

For updated data from our greywater treatment systems visit wateragain.org.

This project, funded by USAID/Middle East Regional Cooperation, is a partnership between The Arava Institute, the Towns Association for Environmental Quality, located in Sakhnin, Israel, and iGREENs, a Jordanian environmental consulting firm. The objective of the project is to implement decentralized methods of wastewater treatment (such as constructed wetlands and membrane bioreactor systems) on a household scale to enable water reuse for agriculture. This will improve the capacity of small-scale farmers in Jordan, West Bank, and the Bedouin communities of Israel to maximize the value of greywater for irrigation.

The Center is the recipient of a USAID MERC (Middle East Regional Cooperation) grant on greywater monitoring for agriculture in off grid communities in Israel and Jordan. The Center is in partnership with the Towns Association of Environmental Quality in Sachnin, northern Israel and iGreens in Jordan. The project involves online and remote monitoring of greywater treatment and reuse systems in Israel and Jordan and the development of a website and smart phone application for real time water quality monitoring for farmers, regulators and researchers.

Remote Monitoring for Hybrid Energy and Water Use

This is a project [provisionally] funded by USAID/MERC; a partnership between AIES, iGREENs, and Tafila Technical University in Jordan. This project aims to build capacity within Jordan to construct and maintain decentralized wastewater treatment programs, using smart grid technology to monitor energy production, energy consumption, and effluent quality from a centralized database and monitoring system.

Off Grid Wastewater Governance in the West Bank

The Center is working in partnership with the Palestinian Wastewater Engineers Group (PWEG) to install an off grid wastewater management utility that will be responsible for the operation and maintenance of off grid wastewater treatment and reuse systems installed by The Center and PWEG. The governance utility will initially serve two Palestinian off grid communities in the Jordan Valley-Al Auja and Marj al Ghazal villages. In the future, the service will expand to more communities in the Jordan Valley and the West Bank.

Wastewater Management for Off-Grid Bedouin Communities in the Negev

The objective of this project is to provide an alternative to inefficient household cesspits by connecting households to onsite wastewater treatment and reuse systems using low-cost wastewater treatment technology. This approach both treats wastewater, thereby minimizing the environmental and public health risk, and provides a direct benefit to the community by providing high quality treated wastewater for local agricultural irrigation needs.

Establishing a Neighborhood Wastewater Treatment and Resuse System in Auja, the West Bank

This is a cooperative project with the Israeli Ministry of Regional Cooperation that connects a neighborhood of at least ten homes to a neighborhood wastewater treatment and reuse system in Al ‘Auja village. The Center has already installed a total of fourteen household greywater treatment and reuse systems in ‘Auja. This project will demonstrate the scalability of the off-grid wastewater management and reuse approach effectively and practically.

Between Israel and the Palestinian Authority, there’s a concern that untreated wastewater generated by communities in the West Bank flows downstream to Israel. The Center is developing a GIS study to map all the transboundary watersheds and to quantify the wastewater flows in each watershed. This work is in support of the AIES Track II environmental diplomacy initiative.

Gaps in Risk Perceptions Between the United States and Israel: Field Experiments on Heterogeneous Types of Recycled Irrigation Water

One of the many projects being carried out by The Center is looking at the use of recycled wastewater in food production and levels of consumer acceptance of these products. In Israel, non-traditional water irrigation practices have been successfully adopted without any known consumer concern about potential health risks associated with using treated wastewater for irrigating food crops. In the U.S., efforts to shift water use from traditional sources to non-traditional sources for food crop irrigation will benefit from a better understanding of the social, behavioral, and economic factors that have contributed to Israel’s advances using these technologies. The main goal of the project is to survey Israeli and American consumers to understand how they respond to the idea of fresh produce being irrigated with recycled water.

Overview of the Greywater Treatment & Reuse Systems
Greywater treatment and reuse for irrigation can reduce up to 40% of domestic water consumption, reduce water costs, and reduce pressure on central wastewater treatment plants. More so, these systems provide an increased supply in water for irrigation while providing off-grid communities with wastewater treatment. The systems in this project were designed with the further intention of being low-tech and low maintenance, appealing to the average family and community in the developing world. Dr. Shlomo Kimchie’s design emphasizes the use of local materials and requires minimal electricity, as it is dependent on the natural forces of gravity for treatment. These systems were also designed to be scalable, allowing for their implementation in single-family homes or entire neighborhoods. The system consists of a series of modular units filled with gravel. The number of these containers depends on both the quality and quantity of the raw greywater at each location, determined by pre installation tests and surveys. The gravel acts as a filter and a medium for bacteria to grow. The bacteria, via aerobic and anaerobic processes, break down and feed on the chemical and organic components in the water. As the water moves from one container to the next, the quality of the water improves. Pretreatment and post treatment can be added to the system if needed, such as settlement ponds or the use of chlorine to remove any additional pathogens.
Greywater Treatment & Reuse System Design 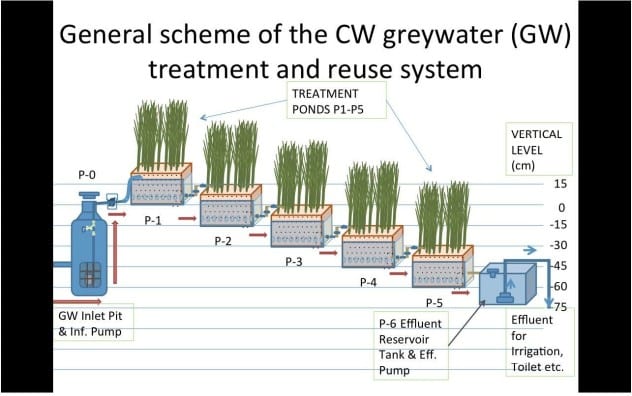 Participants in a Jan 2014 workshop at the Towns Association for Environmental Quality take a tour of USAID-funded greywater treatment site.

Sachnin, Arab town, Israel (funded by USAID) In Sachnin, an Arab town in the north of Israel, USAID has funded the construction of a greywater system at the Towns Association for Environmental Quality (TAEQ). TAEQ is an environmental community center and environmental organization serving the six Arab towns in the Bet Natufa valley of the Galilee. With more than 1,000 visitors a year, this system plays a role in TAEQs work to promote sustainable development and community action.

Halhul, West Bank (Funded by USAID) A USAID funded greywater system was built in the Palestinian town of Halhul, located north of Hebron. This system was built in the household of seven, and provides the family with 10 cubic meters of water per month, which reduces their need for water from the public network by 30-60%, depending on the time of year. The mother in the family shared with an Arava Institute student that “water is the life for humans, for plants, for all. We pray for water and rain to come. This water is beneficial and we use the water in many purposes.”

This system was constructed in a household in Deir Hatab. The system will irrigate the beautiful citrus and olive trees in their home.

Deir Hatab, West Bank (funded by USAID) Deir Hatab is a Palestinian town to the north east of Nablus. This system serves a family of 8, with one more baby on the way this Spring. The family is using the grey water to irrigate citrus trees and olive trees in their home. Zawata, West Bank (funded by USAID) The last system funded by USAID was constructed in Zawata, a Palestinian town located to the west of Nablus. This family of six uses the water produced by their greywater system to water lemon, apple, fig, and almond trees in their home.

Arava Institute staff and students meet with the family outside of their new greywater system as part of a cost benefit analysis of the greywater project in the West Bank.

Deir Salah, West Bank (funded by USAID) A USAID-funded greywater system was constructed in the Palestinian town of Deir Salah, located to the east of Bethlehem. This system is run through the home of a family of seven. The father of this family is dependent on olive tree wood for his business, as he creates beautiful sculptures sold in local tourism businesses. In addition to providing irrigation for the trees, the family takes advantage of the new market this system as opened for them. As the mother shared with the Arava Institute that “the project is very helpful. We use it for producing crops that we sell in the farmers market.”

Zawata, West Bank (funded by USAID) A greywater system, funded by USAID, was constructed at the home of a family of six in Zawata. Zawata is a rural Palestinian town in the West Bank located just north of Nabulus. Historically, Zawata was known for its production of winter crops and citrus fruits irrigated by the fresh waters of local springs. This reality no longer exists and the community depends on unreliable water and wastewater networks. The family in Zawata is now able to irrigate their land using water from their greywater system, both supplying food for the family and hopefully soon in the local market.

We also work in the communities of Auja, Maj al Ghazal, Wadi Arikha, and Umm Batin.

communities through education, health, economic opportunity and human rights in a sustainable way. Osprey connects, educates, and energizes through both proven and cutting edge projects in order to push the boundaries of development. Their aim is to inspire global citizens to realize their own potential to tackle the social, environmental, and economic challenges the world faces today.

irrigation offering, Netafim builds on over 45 years of innovation and field-proven success in agricultural irrigation worldwide. Keeping in mind our corporate promise to help customers grow more with less, we are constantly defining new ways of delivering on that pledge. With the world’s most efficient drip and micro-irrigation technology on the one hand, and recognition of the evolving needs of a diverse and dynamic global customer base on the other, our solutions are always more accurate, controlled, consistent and creative.